How is the Champagne made?

1. The harvest
This must be done by hand in order to preserve the grapes and avoid the colouring of their juice.

2. Pressing
In Champagne, the presses are often located outside the vineyard. They must be approved by the Comité interprofessionnel et l'Institut national de l'origine et de la qualité (Inao) and be located as close as possible to the vines in order to avoid the risks of oxidation or maceration.

3. Winemaking
Today, many of the big houses buy barrels either to make wine or to age or preserve the wines. In the spring following the harvest, the "vins clairs" (clear colored wines) from different grape varieties, vintages or locations are tasted and, if necessary, blended according to the desired vintages.

4. (Tirage) or bottling the blended wine and resting on wooden slats (lattes)
Once the bottling and blending is complete, the wine is bottled with a liqueur de tirage, a mixture of yeast and sugar, to create carbon dioxide. This is called the "prise de mousse" (literally ’capturing the froth’) and lasts about 2 months. The bottles are then stored "on wooden slats" (lattes) for a minimum of 15 months before riddling to allow the deposit created by the yeast to flow back down to the neck.

6. Disgorgement & dosage
Most often, the neck of the bottle is plunged into a bath of refrigerated brine to freeze the deposit and facilitate its extraction. The missing volume is completed with the liqueur de dosage which, depending on the sugar added, defines the quality of the Champagne.


How to recognize a real Champagne? Distinguishing Champagne from other sparkling wines

Champagne differs from other sparkling wines in several ways:

When was Champagne created?

Wines, their sparkle and froth, have long been known in the wine world. An Egyptian papyrus dated 23 October 522 CE mentions cases where a sale of wine was cancelled because of a re-fermentation in the spring. This second fermentation, which gave the wine a fizz, was considered a defect.
During the Middle Ages, other documents also mention this second fermentation without associating it with a particular type of wine. From 1200 to about 1570 AD, sparkling wines are mentioned several times in various historical documents.
It was in the years 1670-1690 that sparkling Champagne appeared and marked a break with its ancestors, sparkling wines. For the first time, Champagne is a wine delimited to a precise region, Champagne. It was also the first time that specific winemaking techniques were developed.
Champagne is historically the first sparkling wine to be produced in a given territory and on a regular basis by local producers.


What is the oldest Champagne House? The history of the first great Houses

The Champagne Ruinart House was founded in 1729 in Épernay by Nicolas Ruinart, the nephew of the Benedictine monk Dom Thierry Ruinart. It is the first and oldest Champagne House.
The creation of Ruinart coincided with the birth of the “siècle des lumières” (Age of Enlightenment) in France and the French art of living. A genuine culture of good and beautiful was born in France, favouring fine and elegant taste. Ruinart's wines naturally found their place in this culture.
Driven by the constant quest for excellence, the House has chosen Chardonnay, a rare and fragile grape variety, as the main thread running through all its wines.

In the 17th century, the monk Dom Pierre Pérignon had the ambition to create the "best wine in the world". This visionary and daring spirit went so far as to invite himself to the table of the “Roi Soleil”, who was won over by the quality of his wine. Three centuries later, the House of Dom Pérignon continues the vision and work of this exceptional craftsman, considered the spiritual father of Champagne.

Heir to the Champagne House in 1833, Louis Roederer took the visionary step of enriching his vineyards in order to control all the stages of wine making. He thus forged a unique style, spirit and taste. From the 1870s onwards, Louis Roederer's Champagne wines travelled as far as the United States, and to Russia to the table of Tsar Alexander II. A man of taste and an inveterate researcher, Louis Roederer II created a new Champagne for the Tsar and launched a new idea: the first "cuvée de prestige"; it was born in 1876 under the name "Cristal". Its subtlety and elegance have since made Louis Roederer's reputation for excellence.

THE HISTORY OF THE CUVÉE CRISTAL

In the middle of the 19th century, Russia was very fond of champagne, and in particular that of Louis Roederer, which exported more than a third of its production. Every year, the House welcomed the Russian emperor's cellar master to Reims to take part in the blending of the imperial court's cuvée. In 1876, he brought an express request from Alexander II, who wanted Louis Roederer to create a unique cuvée for him, in terms of quality and form.
The House then called on a Flemish master glassmaker to create a transparent, flat-bottomed crystal bottle. This characteristic flat bottom eliminated the risk of a bomb being hidden in the bottle's neck, as Alexander II feared attacks. Served at court in a white cloth, the transparent crystal neck also allowed the emperor to see the wine he was about to drink and to appreciate its golden colour
The House then selected its best vines from the seven most renowned crus of its vineyard, located on limestone soils to give the wine a crystalline dimension. This choice, made in 1876, has been extended to the present day and gives the cuvée the exceptional balance that characterises it
In 1908, Nicolas II paid tribute to the House of Louis Roederer by awarding it the title of "Official Supplier to the Court of His Majesty the Emperor". Since then, the bottles of Cristal bear the imperial coat of arms in medallion. Reserved exclusively for the Tsars of Russia, Cristal is the first prestige cuvee in the history of Champagne.

In 1805, Madame Clicquot became a widow while still very young. She was only 27 years old when she took over the reins of the Champagne House founded in 1772 by her late husband's family. Inspired by her creative vision, her quest for excellence and her spirit of innovation, she created the first vintage champagne (1810), the remuage table (1816) and the first rosé champagne blend (1818).

Founded in 1743, Moët & Chandon has passed on its unrivalled and innovative winemaking expertise from generation to generation. Claude Moët, its founder, was the first to embody these values, when he made his champagne one of the most prized in Europe.

The appellation d'Origine Contrôlée links a product to its geographical origin and subjects it to rules of production and elaboration. The products recognised as AOC are the expression of an intimate link between a production and a terroir, all implemented and perpetuated by the know-how of men.

The main rules of the AOC Champagne are:

Why is Champagne considered the king of wines?

Until the Middle Ages, it was the clergy who looked after the vineyards. The wine was drunk during mass. Saint Remi, a bishop of Reims, who lived in a villa near present-day Epernay, baptised Clovis when he converted. The first king of France was thus crowned in Champagne.
The marriage of Jeanne de Navarre and Philippe le Bel definitively sealed the fate of the county of Champagne and the crown of France.
From the 1870s onwards, Louis Roederer Champagne wines travelled as far as the United States, and to Russia to the table of Tsar Alexander II.
A man of taste and an inveterate researcher, Louis Roederer II created a new Champagne for the Tsar and launched a new idea: the first "prestige cuvée"; it was born in 1876 under the name "Cristal". Its subtlety and elegance have since made Louis Roederer's reputation for excellence.
For two centuries, Champagne has always featured on royal wedding menus.


Why is Champagne an expensive product? - Champagne or Prosecco?

Producing in Champagne is expensive. The first reason being the cost of the vineyards. The obligation of manual harvesting also has an impact on the price.
Also, the Champagne method of winemaking is demanding. It requires time and a lot of handling. The costs resulting from this know-how are much higher than for other sparkling wine production techniques.
In addition, in order to achieve a constant and irreproachable quality, the majority of Champagnes are made from a blend of several vintages. The maturation periods are also much longer than for sparkling wines.
All Champagne wines mature for a minimum of 15 months in the cellars of their producers. Three years are necessary for the vintage wines and much more for the special cuvées.
These particularities and this know-how have a cost which can be very high for the most prestigious vintages.

The term "brut" designates more than 90% of Champagne wines and refers to a dosage. It is the addition of a touch of sugar necessary for the perfect expression of the aromas. This sweetness, which varies from one wine to another, makes it possible to establish a scale from the least sweet Champagne to the sweetest, i.e. from brut nature to brut, dry and demi-sec.

What is a blanc de blancs Champagne ?

A blanc de blancs is a blend of white grapes only.

What is a blanc de noirs Champagne ?

A blanc de noirs is a blend of only the black grapes of pinot noir and/or meunier.

What is a rosé Champagne?

Rosés are obtained by maceration of black grapes or by blending white wines with a "still" red wine from the Champagne appellation.

How to drink Champagne? Which glass to use?

Forget the flutes! Paradoxically, the flute or Champagne cup is present in everyday language despite being condemned by all connoisseurs.
It is highly recommended to drink Champagne in tulip-shaped glasses to allow the aromas to express themselves better.

Ideally, glasses should be rinsed with hot water to remove the fatty residue of the washing agents on the wall of the glass which prevents the formation of foam.

At what temperature should Champagne be drunk?

The two recommended cooling modes are :

In any case, it is important to avoid cooling a bottle in a "brutal" way, in the freezer for example.

How to serve Champagne?

How to store Champagne?

Champagne should be stored in a dark place at a low and constant temperature (about 10°C). Ideally, the humidity level is high.

How to keep Champagne open?

An opened Champagne can be kept for 48 hours by using a special Champagne stopper. You can find them on our website in the accessories section.

Beyond the aperitif and like all high quality wines, Champagne is the ideal accompaniment to the finest of dishes. Here is a glimpse of the endless universe of "Champagne & Cheese". 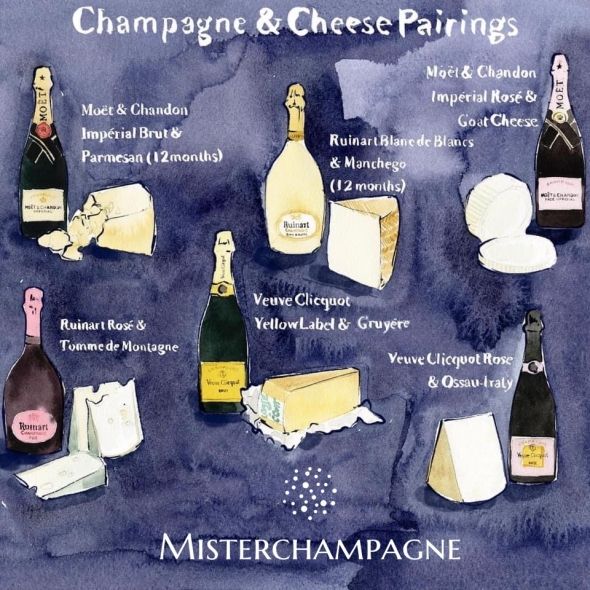 
Which Champagne for a wedding?

Depending on your budget, all Champagnes are ideal for celebrating life's big events. In addition, we offer a wide range of personalisation options to keep a unique souvenir of "D-Day".

Save products on your wishlist to buy them later or share with your friends.

No account? Create one here
Product added to wishlist